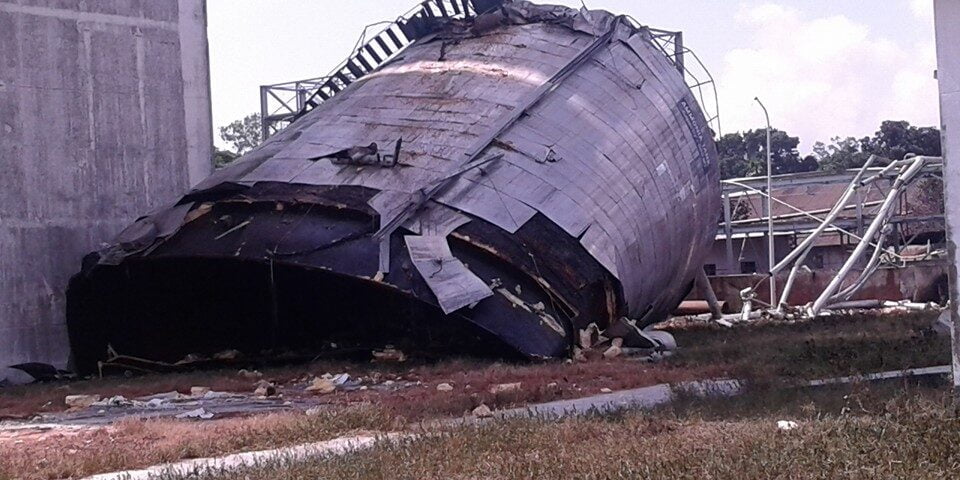 On 22 August 2016, an enormous quantity of toxic ammonia gas was released because of overpressure explosion of an ammonia tank in the Di-ammonium Phosphate Factory Limited known as DAP-1. The factory was established in 2006 on the premises of the Chittagong Urea Fertilizer Limited (CUFL) on the south bank of the Karnaphuli River, Bangladesh. The Di-ammonium phosphate factory has a production capacity of 1600 ton di-ammonium phosphate per day. It has two 500 ton ammonia tanks which supply ammonia to the process through pipeline during the operation. One of the tanks which exploded was partially full containing 325 ton of anhydrous ammonia at the time of the incident, completely rift from its base and landed about 35 feet away from its base. Hence, a huge gas cloud was formed and dispersed into air. The toxic ammonia gas spread over several kilometres and wind carried away the gas to the corresponding side of the Karnaphuli River leaving nearly 250 people falling sick due to inhaling the toxic ammonia gas. About fifty individuals were required hospitalization the same night. Locals in the affected area were advised to stay home but they were feeling uncomfortable even staying inside homes with windows and doors closed. Many of them developed sickness, respiration problems and severe eye irritation. 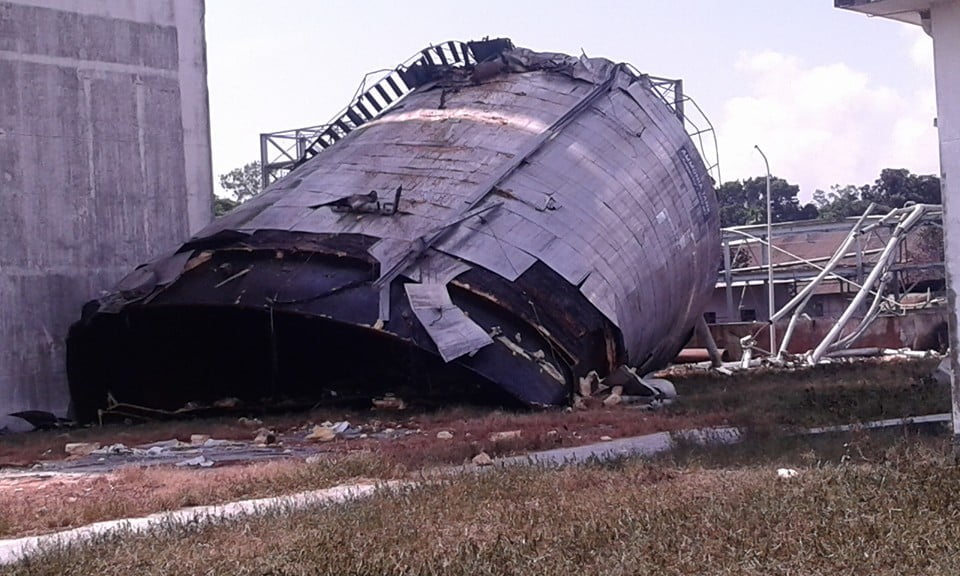 It is well known today that anhydrous gaseous ammonia can form an explosive atmosphere when mixed with air. However, the flame speed and maximum rate of pressure rise are rather low. Besides, explosion risks mainly exist due to the handling of ammonia in confined spaces. Indeed, there is no example of anhydrous gaseous ammonia explosion in the open air. At the same time, ammonia solution vapours are often not considered as flammable in air, although they have been involved in some explosions as reported by the researchers. In fact, the available data are limited for proper explosion risk assessment [1].

Ammonia gas is corrosive, toxic and can rapidly penetrate the eye even in low concentration (below 20 PPM-parts per million). The degree of damage for a human depends on the length of exposure and toxicant concentration. At high enough concentrations, it can react with moisture in the skin, eyes and respiratory systems to cause tissue burns, blindness or potentially fatal pulmonary diseases. It can be fatal if the concentration exceeds 2500 PPM for 2 hours of exposure. The tolerable limit for most individual is as high as 250 PPM for 30 minutes exposure. The maximum exposure limit of ammonia gas as recommended by ACGIH is 25 PPM (17 mg/m3) [2] for 8 hours and short term exposure limit is 35 PPM (24 mg/m3) for 15 minutes.

The release of toxic anhydrous ammonia is harmful for workers and public as well as the environment. Ammonia that diffused into water bodies would increase pH and have an adverse impact on overall aquatic ecosystem. Fishermen already found plenty of dead fish from nearby contaminated pond. The industries which are dealing with hazardous materials or toxic chemicals should perform risk evaluation and consequences analysis for the worst possible scenario. Based on atmospheric conditions, wind direction and wind velocity, it is possible to estimate the affected area should maximum exposure limit be reached for a certain amount of chemical release. This helps to identify potential emergency scenarios and develop a proper emergency response plan. Public should be aware of the potential hazard that exits in their proximity. 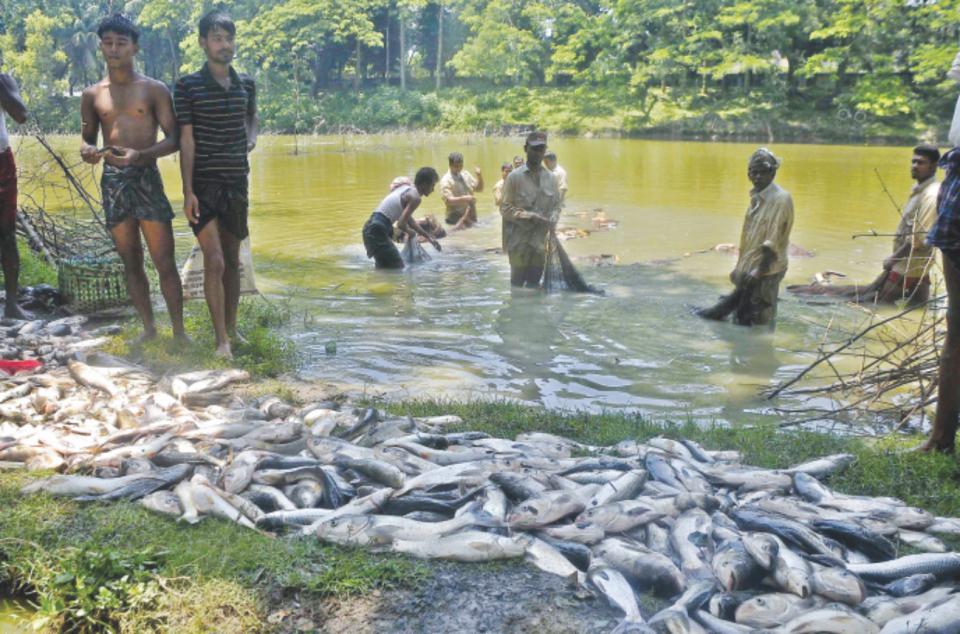 Deficiencies at many levels are often hold responsible for any catastrophic incident occurring. Failure of safety instrumentation, lack of protection layers, and lack of risk understanding, mechanical integrity failures and absence of safety culture often lead to a safety incident. Therefore, it is recommended to conduct a thorough process safety analysis, risk evaluation and consequence analysis for the industries dealing with hazardous materials. Process safety analysis and proactive actions are necessary to avoid any potential incident occurring.

There are many possible causes that can lead to an explosion of a pressurized tank, i.e. faulty tank, internal corrosion, external corrosion, flow interruption, failure of control valve, failure of relief valve, increase of temperature / pressure and / or human error. However, the way tank explodes indicates that the tank was over pressurized due to operational error or mechanical integrity failures. In addition, there was no additional layer of protection that can contain the released ammonia and minimize the consequences. Process hazard analysis should be conducted to identify all causes, estimate the risk and develop strategies to address the risk and install additional layer of protection to minimize the consequences if accident occurs. Continuous inspection, risk monitoring, risk communication among employees and proactive actions can prevent such an accident from occurring in the future.

Explosivity of ammonia has been studied for a long time: the first experimental flammability limits for an ammonia and oxygen mixture were published in 1809. Despite these first results, the ability of ammonia to create explosive mixtures was denied for a long time until German experts put forward an ammonia decomposition to explain explosions in refrigeration equipment at the beginning of the 20th century [3]. Nowadays, it is well recognized that ammonia can ignite and explode under certain conditions of containment, within enclosures for instance, when its concentration in air is between 15 and 28% v/v. These are the most accepted concentrations limits. The main combustion products of ammonia in air are nitrogen and water. Ammonia explosiveness played a key role in various industrial accidents, in particular in refrigeration processes [4]. None of the reported accidents was related to ammonia explosion in open air.

The main characteristics of ammonia combustion are [5]:

This high solubility is due to chemical reactions between ammonia and water both under ionized forms:

These experiments are conducted in a standardized 20 litre sphere (Kuehner) previously described in Dupont and Accorsi in 2006 [6]. A typical diagram is shown in Figure 1. The pressure variation during explosions is recorded with two independent piezo-mechanical pressure transducers (Kistler). The explosion is triggered by an electrical arc generated by a fusing wire located at the centre of the sphere. It delivers ignition energy of 20 J. This high energy level is sufficient to ignite any potentially explosive atmospheres but at the same time does not contribute directly to pressure rise inside the sphere.

The 20-litre sphere is heated up at the required temperature with a water jacket and the entire sphere is thermally insulated to avoid water condensation inside the sphere on cooler parts such as on the sphere lid. For temperatures below 288 K, the thermo fluid used is glycol ether.

The fuel / air desired mixtures were obtained by the partial pressure method at a total pressure of 1 bar. To perform a test, the desired quantity of the liquid solution, calculated to be in excess for the sphere atmosphere volume to be saturated with water vapour, was injected in the empty sphere with a syringe.

Then, after the time necessary to reach liquid / vapour equilibrium, air was introduced.

The lower explosion point (LEP) of a flammable liquid [5] is the temperature at which the concentration of the saturated vapour / air mixture equals the lower explosive limit (LEL) of the vapour phase composition.

The flash point is the lowest temperature of a flammable liquid at which an ignition in the vapour phase initiated by a test flame will propagate. 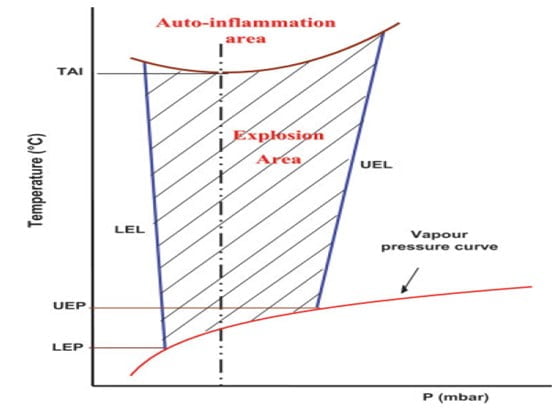 Besides that, ammonia solutions do not exhibit a flash point; however, their vapours can explode when mixed with air: they have an LEP. This fact results from definitions and from experimental determination techniques of these characteristics. Similar conclusions are often drawn with aqueous solutions in which water vapours can inert the atmosphere. Therefore, explosion hazards of ammonia vapours should not be neglected in safety studies [6].

In this article, it was shown that the explosion characteristics and flammability limits of various aqueous ammonia vapours in air are measurable at atmospheric pressure and at various temperatures using a 20-L explosion sphere.

Atmospheres above ammonia solutions consist of gaseous ammonia, air and water vapour, in concentrations depending on working temperatures. Both water vapour and ammonia concentrations increase with temperature but as ammonia and water react together in solution to form ammonium hydroxide ions, partial pressures do not fit with saturated vapour curves of each component.

As for the working temperature ranges, LEL and UEL, we can conclude that: