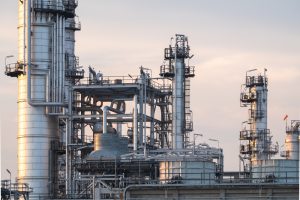 A release of Benfield Solution (Hot Potassium Carbonate) and Syngas from the level bridle of the CO2 Absorber in the Ammonia plant resulted in a plant shutdown and subsequently a fire.

The fire was safely brought under control. There were no personnel injuries, and damage was limited to the level bridle and the immediate vicinity of the bridle. Restorative work, including demolition, material procurement, fabrication, NDE and insulation took seven days.

The bridle is made up of two nozzles attached to the tower (B1 & B2), four nipples attached to two separate level glasses (LG1, LG2, LG3 and LG4) and two further nozzles attached to a level transmitter LT, all of which provides the level of Benfield solution within the absorption tower – Figure 1. The normal level during operation is as indicated in Fig. 1 (marked “L.L”) and operating data for the level bridle pipe is given in Table 1.

The failure occurred in the form of a sudden, total loss of containment with no previously identified leaks in the area. A section of the bridle was found to have peeled off. The failure took place directly in line with nozzle B1, approximately 1ft 3 inches below it. Upon inspection, immediately after the incident, vertical grooves emanating from the nozzle downwards were noted. There appears to have been some corrosive actions due to condensation of the Benfield vapour at nozzle B1 which continuously ran down the sides of the bridle wall. The appearance of the transverse part of the fracture surface is shown in Figure 4. 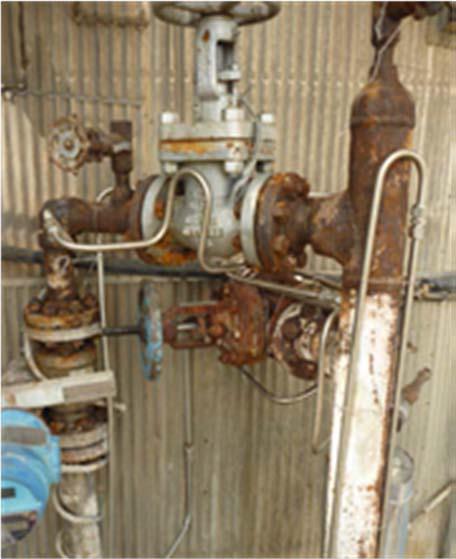 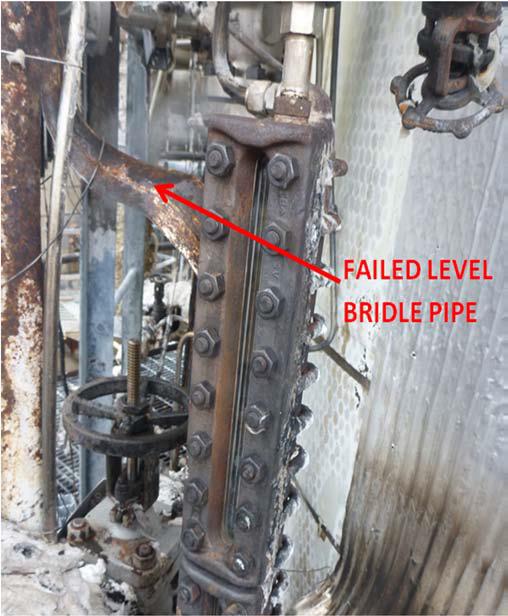 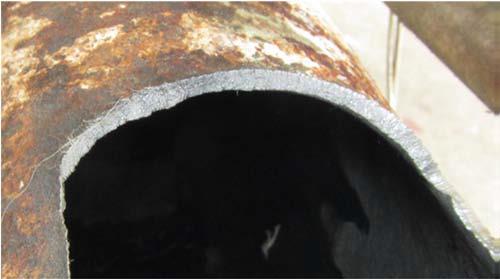 The tube ruptured due to ductile overload in the result of localised thinning from internal surface corrosion.

The source of corrosive liquid appears to be condensation of Benfield vapours at nozzle B1, which had continuously run down the bridle wall. The depth of the corrosion grooves tapered off as the general Benfield liquid level was reached.

The appearance of the rupture indicated that the tube initially ruptured along two deep longitudinal corrosion grooves.

The very narrow fracture surfaces on the longitudinal parts of the rupture showed that the bridle had suffered from severe local wall metal loss. The bridle wall thickness was less than 0.5 mm along parts of the deeper corrosion grooves. This thickness was below minimum required thickness to withhold the internal pressure of 400 psig (~28 bar) [3] and suggested that the rupture was initiated due to this reason (mechanical overload).

The failure was not due to CO2 Stress Corrosion Cracking as initially thought.

Diaphragm Seals are also used for liquid level measurements in pressure retaining tanks instead of ‘wet legs’ or ‘dead legs’. Dead legs or wet leg are generally made with tubing mounted directly to the transmitter and is filled with process medium. Diaphragm Seals Systems offer installation flexibility and maintenance advantages over wet leg systems. Diaphragm Seals make it easier to maintain the fluid between the tap and the transmitter, especially on the reference or low pressure side. In vacuum systems, a closed seal system, rather than an open wet leg, maintains a constant height for the low side reference. The Diaphragm Seal System does not need to be refilled or drained. They are also not vulnerable to plugging or freezing and they are easier to control than wet leg systems.