Ammonia as an Energy Vector

Agustin Valera-Medina is a Reader/Associate Professor at Cardiff School of Engineering. He has participated as Principal Investigator (PI) or Co-Investigator (Co-I) on 26 industrial projects with multinationals including PEMEX, Rolls-Royce, Siemens, Ricardo, Airbus, and EON, attracting approximately £8.6M in research and development. He has published 151 papers (h-index 21), 28 of these specifically concerning ammonia power. He has been part of various scientific boards, chairing sessions in international conferences, and moderating large industrial panels on the topic of “Ammonia for Direct Use.” He supported the preparation of the Royal Society Policy Briefings “Green Ammonia” on the use of ammonia as an energy vector, and he is the main author of the book “Techno-economic challenges of green ammonia as energy vector” (Elsevier). 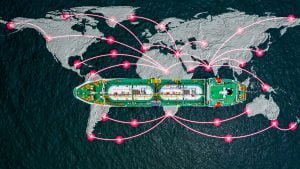 Recent climate events have led industry, governments and institutions around the world to continue looking for new methods of mitigating carbon emissions towards the atmosphere. Several methods have been assessed over the years, with the inclusion of new chemicals capable of substituting fossil fuels for transport, heating and processes. Amongst these chemicals, hydrogen has been a candidate continuously addressed as the most suitable for mitigating carbon whilst delivering the power needed for our current energy necessities. Hydrogen, when burned, only produces water in the most ideal scenarios, thus decreasing the emission of unwanted pollutants.

For more than 200 years hydrogen has been an option for the production of energy with only water and heat as main by-products. Early studies led to the most notorious citations in modern literature, including Jules Verne’s prophesies embodied in his novel “The Mysterious Island” (1874),

’And what will they burn instead of coal?’ asked Pencroft. ’Water,’ replied Harding. ‘Water as fuel for steamers and engines! Water to heat water!’. ’But water decomposed into its primitive elements.’ Replied Cyrus Harding, ‘…I believe that water will one day be employed as fuel, that hydrogen and oxygen which constitute it will furnish an inexhaustible source of heat and light… Water will be the coal of the future’

However, the ideal combustion of hydrogen is never accomplished, and usually other greenhouse gas emissions such as nitrogen oxides are produced. Furthermore, handling hydrogen is extremely difficult, with a molecule that needs to be in its cryogenic form (around -253 degrees Centigrade) or at pressures around 700 atmospheres to be in its liquid form, thus posing major operative, health and safety issues. The problem is accompanied by leaks in most materials (being the smallest molecule in the universe), and operability complications due its reactivity. A way around these barriers is to use fuel cells, which do not employ combustion to release energy. However, the efficiency of these fuel cells is based on the purity of hydrogen, with most materials having a limited life spam with extremely small power outputs, a critical issue for large scale processes. For that reason, other chemical sources are now under the scope of the International Energy Agency, one of them being ammonia.

Ammonia has recently become an interesting molecule for the storage of hydrogen and production of power, heating and cooling, an additional benefit of using ammonia as working fluid. Ammonia has been employed for years in the fertilizing and farming sector, with a well-established infrastructure that can be employed to move and store the chemical with relatively simple implementations. In contrast to hydrogen, which is a small, highly diffusive molecule, ammonia has a viscosity and density similar to methane, making it easier to handle. Correspondingly, the use of ammonia over the decades, i.e. since the use of synthesis gas from Mond’s processes to the implementation and global commercialization of the Haber-Bosh process, has created a vast reservoir of international experience that has led to the creation of large scale storage sites (i.e. like those located at the QAFCO ammonia production facility at Mesaieed, Qatar, with an overall footprint of around one hectare) fed by complex global distribution lines. This vast infrastructure is supported by pipeline grids that run for thousands of miles across the US and Russia, with some smaller infrastructure in Europe that is combined with trains, trucks and tankers that supply the chemical for fertilizer applications.

Ammonia, initially produced industrially in the mid-nineteenth century, has become the second most commercialised chemical over the world. This fact empowers ammonia, providing a vast reservoir of knowledge for its employment as energy vector for flexible use and storage of hydrogen. Furthermore, its regular use in farming applications forecasts that ammonia can be an adequate fossil substitute in these facilities, enabling greater flexibility to be employed as an energy vector for power or heating, whilst allowing its further use as a fertilizer when needed (i.e. lack of fertilizer, better market prices, electricity cost, etc). The great variety of applications that ammonia can support will ensure that countryside locations and farming lands might consider the chemical as the best method to power, heat up and cool down their regular needs. Furthermore, ammonia combustion (in engines) or recombination (in fuel cells) deliver mostly water and nitrogen, both molecules that are highly abundant in the atmosphere.

However, there are many issues still to be resolved before the global deployment of ammonia as an energy vector can be accomplished. Ammonia combustion produces high levels of nitrogen oxides in conjunction with slow reactivity that needs to be improved using doping agents (usually hydrogen obtained from the same ammonia stream). In fuel cells, the efficiency and size of these systems is still too low and not sufficiency, respectively, to cope with domestic or industrial demands. Finally, there are still strong questions on how the public and farming users might consider the use of ammonia as a fuelling source, knowing that ammonia is toxic at relatively low concentrations. All these issues need to be overcome before we can fully use ammonia as a vector that substitutes large parts of the fossil consumption we incur nowadays. 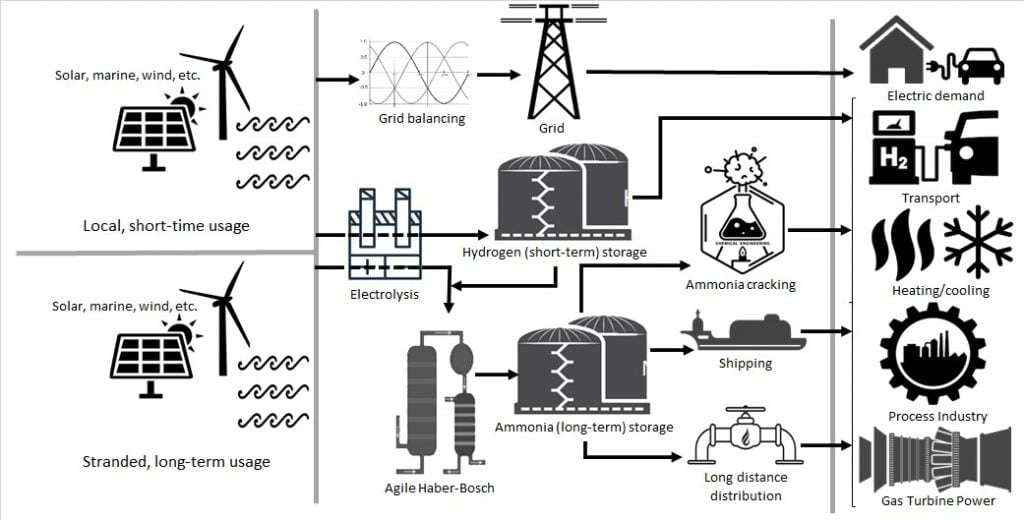 For that reason, great amounts of work are ongoing worldwide in areas that range from green production of ammonia (via wind or solar energy) to clean production of energy and power from ammonia using large gas turbines and engines. These new concepts are envisaged to resolve some of the most critical issues of today’s society,

Therefore, through these columns, I will attempt to present the most recent findings in the area, thus keeping readers aware of the advancement of these technologies and the interesting future that they pose for decarbonising the energy and transportation sectors. As a vision, this will enable all readers to actively engage in the subject and contribute at various extents to the global deployment of ammonia as an energy vector that can be core to the farming and countryside activities of our modern society.